A technique used in molecular biology for the detection of mutations, polymorphisms and epigenetic differences in DNA samples.

What is HRM analysis?

HRM (high resolution melting) analysis is a post-PCR analysis method used to identify genetic variation in nucleic acid sequences. This simple and rapid method is based on PCR melting (dissociation) curve techniques. HRM analysis can discriminate DNA sequences on the basis of their composition, length, GC content or strand complementarity.

What are the applications of HRM analysis?

How does HRM analysis work?

At the beginning of the HRM analysis there is a PCR (polymerase chain reaction) to amplify the DNA region where the mutation, polymorphism or epigenetic difference of interest is located. In addition to the typical ingredients of any PCR (nucleotides, polymerase, magnesium), this PCR includes a fluorescent agent (e.g. SybrGreen) that is inserted into the double-stranded DNA during amplification. Once the PCR is finished, there are now many copies of the DNA region of interest (known as amplicon) in the sample tube.

Now begins the HRM analysis itself, which involves precise heating of the DNA in the sample from about 50˚C to about 95˚C. At some point in this process, the melting temperature of each of the amplicons in the sample is reached and the two strands of DNA separate.

The key to HRM analysis is to monitor the separation of the two DNA strands in real time. For this purpose, different fluorescent substances are currently available that intercalate into the double-stranded DNA and when bound to it emit high fluorescence. When they are in solution (not bound to the DNA) they emit a low fluorescence.

At the beginning of the HRM analysis there is a high level of fluorescence in the sample because many of these fluorescent molecules are bound to the billions of copies of the amplicon (of the amplicons).

The HRM device has a system capable of measuring the fluorescence of the sample and software that allows the detected data to be plotted on a graph known as a melting curve, which shows the level of fluorescence versus temperature.

The resulting melting profile reflects the mixture of amplicons present. Aspects such as GC content, length, sequence and heterozygosity will add to the melting curve characteristics of each amplicon. The resulting profiles can provide valuable information for mutation screening, genotyping, methylation and other research applications. 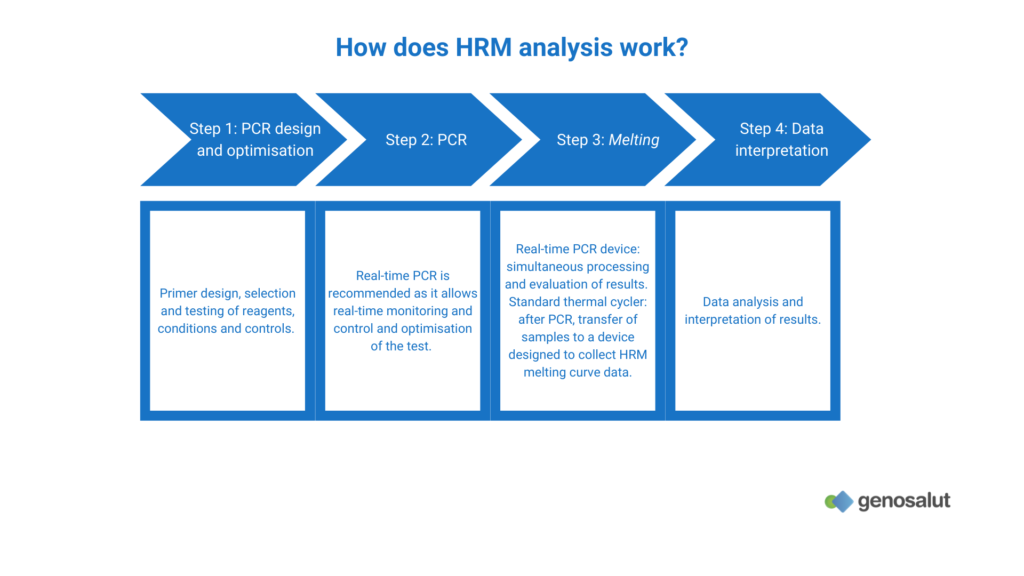 Do you have questions about our technologies and services?