Test to analyse genetic variants that influence metabolism, obesity and also those related to food intolerances.

On request, depending on the test

On request, depending on the test

What is a nutrigenetic test?

A nutrigenetic test is a test that allows us to learn a little more about our DNA in order to adapt our diet to our needs and also to identify food intolerances.

Genetic differences can not only condition nutritional needs but also predispose to different pathologies of multifactorial origin, those in which both genetics and the environment play an important role.

From a blood sample, we extract your DNA and using real-time PCR (RT-PCR, also known as quantitative PCR or qPCR) we examine 25 genetic variants implicated in: the development of food intolerances, the adoption of addictive behaviours that increase the need for food intake, the metabolic response to fats, carbohydrates and vitamins, the development of obesity and the response to physical exercise.

Who is the nutrigenetic test aimed at?

This test is aimed at anyone who wants to personalise and adapt their diet to their genetic information and find out their metabolic needs, whether to lose weight or simply to maintain a healthy diet and lifestyle.

This personalised nutrigenetic study will help you to establish dietary and sports routines adjusted to your metabolic needs. If you are thinking of starting a weight loss programme, or you are simply interested in maintaining a healthy diet, the aim of this test is to give you information about your genome that can help you modify your eating and lifestyle habits.

Information from the nutrigenetic test

You can find out if you are lactose intolerant, hypersensitive to alcohol or predisposed to coeliac disease (gluten intolerance).

You can find out if you are predisposed to certain addictive behaviours: tendency to snack between meals, lack of satiety and the reinforcing value of food.

You can know your energy metabolism balance and your risk of obesity and related health problems: type 2 diabetes, metabolic syndrome and BMI increases.

You can find out how your body responds to exercise in terms of: weight loss, blood pressure, metabolism and insulin sensitivity.

You can find out how your body responds to the intake of certain foods based on the nutrients they contain: carbohydrates, triglycerides, saturated fats, monounsaturated fats, omega-3 fatty acids and omega-6 fatty acids. 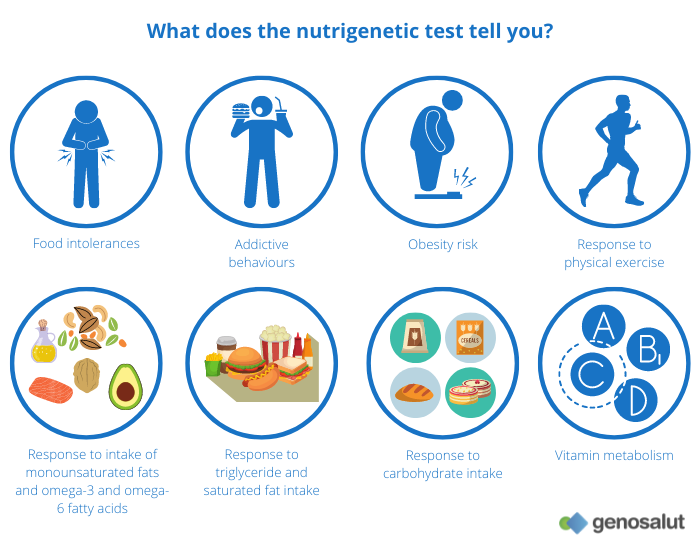 How can I request a nutrigenetic test?

Contact us through the form, by e-mail or by telephone to make an appointment with us.

You can also consult your doctor for information on the possibilities of genetic testing.

We analyse the probe

In our genetic diagnostics laboratory we analyse the sample with the latest technology.

We write a report

We provide a detailed description of the results and, if necessary, genetic counselling.

What is the nutrigenetic test for?

Nutrigenetic testing can help you :

Lactose intolerance: What it is, its incidence and what it says about your genetics

Lactose intolerance is defined as the inability to digest lactose, the sugar present in milk and all its derivatives. This condition is caused by the absence of the enzyme lactase.

About 15% of the Spanish population unknowingly suffers from lactose intolerance.

Most people are born with the ability to digest lactose, the main carbohydrate in milk and the main source of nutrition until weaning. Approximately 75% of the world’s population loses this ability at some point, while others are able to digest lactose in adulthood. When there is insufficient lactase enzyme in the small intestine to hydrolyse consumed lactose into glucose and galactose, it passes partially or completely undigested into the large intestine, where it will be broken down by the intestinal flora, generating compounds such as hydrogen, carbon dioxide, methane and short-chain fatty acids that cause bloating and abdominal pain, as well as diarrhoea.

The MCM6 gene is primarily responsible for the persistence or non-persistence of lactase activity in adults. This gene contains two of the regulatory regions of LCT, the gene encoding the lactase protein, located in two of the introns of MCM6. Mutations in these regions are associated with lactose tolerance in adulthood. With our nutrigenetic test we analyse the rs182549 variant. It has been shown that people with the CC genotype are genetically predisposed to the development of lactose intolerance. The presence of the C allele in homozygosis reduces lactase enzyme activity. If your genotype is CT or TT, you have a lower risk of lactose intolerance.

Hypersensitivity to alcohol: what it is and what your genetics tell you

Drinking alcoholic beverages can be a pleasurable activity for some, while the same activity can be very unpleasant for others, due to the body’s adverse reaction to alcohol. This hypersensitivity reaction to alcohol manifests itself even when drinking minimal amounts of alcohol and usually results in a reddening of the face, accompanied by a feeling of warmth and stinging. People suffering from alcohol hypersensitivity often experience other symptoms in response to alcohol intake, such as rapid heartbeat, nausea, dizziness and severe hangovers. Alcohol metabolism is carried out by two enzyme systems in the liver: alcohol dehydrogenase and aldehyde dehydrogenase enzymes, encoded by the ADH and ALDH genes, respectively.

For the ALDH2 gene, a variant associated with alcohol hypersensitivity has been discovered. This is the rs671 variant. If your genotype is AA or AG, you have a genetic predisposition to develop episodes of alcohol hypersensitivity in response to alcohol intake. The A allele codes for a defective form of the enzyme alcohol dehydrogenase. This causes alcohol to be inefficiently metabolised and accumulate in the blood, causing the dreaded hangover, which can manifest with headache, dizziness, nausea, fatigue, as well as sensitivity to light and sound. If your genotype is GG, you have a lower genetic predisposition to develop these hypersensitivity episodes in response to alcohol consumption.

Coeliac disease or gluten intolerance: what it is, its incidence and what it says about your genetics

Coeliac disease is a malabsorption disorder, caused by interactions between genetic and environmental factors. One environmental factor precipitating the development of the disease is gluten or related proteins present in cereals such as wheat, barley and rye. Immunological intolerance causes a chronic inflammatory response in the mucosa of the small intestine with symptoms such as diarrhoea, steatorrhoea and weight loss.

It is one of the most common diseases in the Caucasian population, with a prevalence of 1:100 in Europe. Early diagnosis is important in order to start a gluten-free diet as soon as possible.

There are many cases of subclinical coeliac disease and also what is known as latent coeliac disease, where there are micro lesions that may become symptomatic over time. The absence of treatment often leads to other autoimmune disorders, such as dermatitis herpetiformis, type 1 diabetes or rheumatoid arthritis. 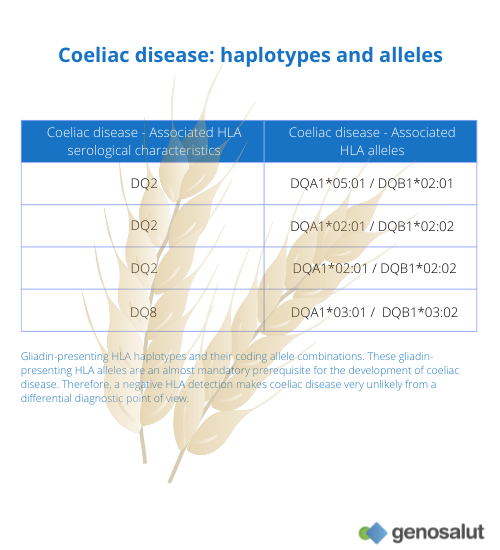 Susceptibility to gluten sensitivity is partly genetically determined. The strongest predisposition is associated with the HLA-DQ alleles, which code for the a- and ß-chains of two major histocompatibility complex (MHC) class II molecules. In most of the populations studied, 90-95% of patients carry the HLA-DQ2 heterodimer, encoded by the DQA1*05 and DQB1*02 alleles in cis position (more common in central and northern Europe) or in trans position (more common in Mediterranean countries). The risk of an individual with the DQA1*05:01-DQB1*02:01 heterodimer (DQ2 haplotype) to suffer from the disease is 50 times higher than that of the average population, but its presence does not predict the development of the disease, as it also appears in a quarter of the general healthy population. The remaining patients (5-10%) usually carry the DQA1*03 and DQB1*03:02 heterodimer (DQ8 haplotype) or carry one of the DQ2 haplotype alleles separately (DQA1*05 or DQB1*02). The presence of the DQA1*03 allele in isolation (i.e. in the absence of the DQB1*03:02 allele) does not imply a risk of developing coeliac disease.

Caffeine metabolisation: what is it and what does your genetics say?

Caffeine is one of the most widely consumed stimulants in the world. It is found naturally in the leaves and seeds of many plants such as tea, coffee and cocoa, and artificially in some soft drinks, energy drinks and some painkilling drugs. Caffeine is metabolised in the liver by the enzyme cytochrome P450 1A2.

The CYP1A2 gene encodes the enzyme responsible for caffeine metabolism. Different allelic variants for the SNP rs760551 of this gene result in different levels of enzyme activity and thus different rates of caffeine metabolisation. The possible phenotypes for the marker are fast metaboliser or slow metaboliser, and therefore the stimulant effects of caffeine will depend on this rate of metabolisation. If you carry a C allele, i.e. if your genotype is CC or AC, then you are a slow metaboliser of caffeine and therefore have an increased risk of hypertension and myocardial infarction associated with caffeine consumption. Conversely, if your genotype is AA, you are a fast metaboliser of caffeine and have a lower vascular risk associated with caffeine consumption.