The cells of the human body contain 23 pairs of chromosomes (46 chromosomes in total). Half of these 46 chromosomes come from the mother and the other half from the father. Chromosomes contain our genetic material with all the information necessary for the correct development and functioning of the organism. The chromosome pairs 1 to 22 are called autosomes and the 23rd pair is known as the sex chromosomes (XX in females and XY in males).

Most of these genomic alterations occur during the production of sperm and eggs. Studies over the last few decades have found that aneuploid gametes (sperm and eggs) are produced at surprisingly high rates (at least 5%, but probably higher than 20%) during the process known as meiosis. If one of these defective sperm or eggs is involved in fertilisation, the embryo will be affected by the abnormality. In most cases, miscarriage will occur, as most aneuploidies are incompatible with normal embryonic development.

Sometimes these alterations can also occur during the early stages of embryo division, affecting the baby as well.

What are the most common aneuploidies?

In humans, the most common aneuploidies are trisomies, which account for about 0.3% of all live births.

Both are trisomies, disorders characterised by the presence of an extra chromosome, bringing the total number of chromosomes to 47. It appears that humans are much better able to tolerate extra sex chromosomes than extra autosomes. Compared to autosomal trisomies, these types of sex chromosome trisomies are quite benign. Affected individuals often show reduced sexual development and fertility, but usually live a normal life, and many of their symptoms can be treated with hormone supplements.

In contrast, trisomies of other autosomes appear to have more severe effects. They are estimated to account for about 35% of miscarriages and are rarely seen in live births. In fact, the only autosomal trisomies detected in any appreciable number among newborns involve chromosomes 13 and 18, but affected babies rarely survive beyond the first months of life.

Monosomies are the opposite of trisomies in that affected individuals are missing one chromosome, reducing their total number of chromosomes to 45. Cells appear to be particularly sensitive to the loss of a chromosome, as the only viable human monosomy affects the X chromosome. Women with a single copy of the X chromosome have the condition known as Turner syndrome.

Another way of classifying aneuploidies refers not to the change in number, but to the type of chromosome that is affected (autosomal, pairs 1 to 22) or sex chromosome (pair 23, X and Y).

As mentioned above, the term “trisomy” is used to describe the presence of three chromosomes instead of the usual pair of chromosomes, i.e. one extra chromosome. Those autosomal aneuploidies that are compatible with life but give rise to genetic diseases that have important consequences for the development of the organism are:

● Trisomy 21 (also known as Down syndrome) occurs in about 1 in 700 births and the risk increases with the mother’s age. It often results in mental retardation and also physical malformations, especially heart defects. The average life expectancy is about 50-60 years.

● Trisomies 18 (Edwards) and 13 (Patau) are rarer and are found in about 1 in 7,000 births. Again, the risk increases with the age of the mother. These trisomies are associated with severe mental retardation and often severe physical malformations. Most of those affected die before or shortly after birth and only rarely survive the first year of life.

As mentioned at the beginning, females have two X chromosomes (XX), while males have one X and one Y chromosome (XY). Sex chromosome aneuploidies consist in the presence of alterations in these chromosomes. These alterations can have different consequences, such as the development of malformations, cognitive and growth disorders, as well as sexual and infertility problems.

● Klinefelter’s syndrome: affects males (approximately 1 in 500 to 1,000) and is caused by the presence of an extra X chromosome (47, XXY). The risk increases with the mother’s age. Those affected by this trisomy usually have increased height, sometimes mild mental retardation and fertility problems.

● Jakob syndrome: affects males (approximately 1 in 1,000) and is caused by the presence of an extra Y chromosome (47, XYYY). Affected individuals are taller than normal, may have some language delay and are generally not mentally retarded.

● Turner syndrome: affects females (approximately 1 in 2,500) and is characterised by a missing X chromosome (45, X0). People with this monosomy have short stature, infertility and sometimes heart and kidney disorders.

Risk of aneuploidy and maternal age

As a woman’s age increases so does the risk of producing eggs with an aneuploidy, which if fertilised will result in an embryo or foetus with an aneuploidy. In most cases, pregnancies with such affected embryos or foetuses will end in miscarriage, and in a low percentage in live births with autosomal aneuploidy or sex chromosome aneuploidy (only those involving an X chromosome defect, as those affecting the Y chromosome can only be transmitted by the father).

The chance of having a child affected by an aneuploidy is:

However, because many aneuploid embryos do not reach term (fail to implant or result in miscarriages) its frequency is much higher than would be expected relative to that of affected newborns.

● In women in the age range 35-39 years more than 20% of the embryos produced are aneuploid.

● In women over 39 years of age about 40% of the embryos produced are aneuploid.

As mentioned above, any embryo with one chromosome missing (monosomy) will fail to implant or develop to term (except for monosomy X or Turner syndrome), and only a few of those carrying an extra chromosome (trisomy) will go to term. Lack of implantation and embryo loss are thought to be the main reasons for the low pregnancy rate above the age of 40.

The cause behind this increased risk of aneuploidy is the design of the egg development process, or ovogenesis. In women, egg precursor cells known as primary oocytes enter a phase of dormancy, known as dictyotene, which begins in the late stages of foetal development (i.e. before birth) and is not completed until ovulation. As the years go by, and like any ageing process, these oocytes can accumulate errors that will result in an aneuploid egg. This is why the eggs of younger women have fewer aneuploidies than those of older women. 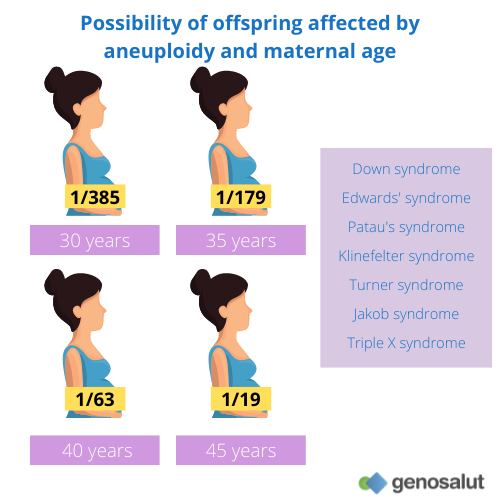 How are fetal aneuploidies detected during pregnancy?

For the detection of fetal aneuploidies there are different prenatal tests, which are generally divided into two main groups: non-invasive and invasive.

The invasive tests are chorion biopsy and amniocentesis. As for aneuploidies, they are only performed to confirm a suspected aneuploidy detected by a non-invasive prenatal test, as they pose a risk of miscarriage of between 1% and 2%.

At Genosalut we have been offering non invasive prenatal tests for more than 10 years. Our basic test analyses the most frequent trisomies (21, 18 and 13), sex chromosome aneuplodies and determines foetal sex. Our extended test also analyses various microdeletional syndromes.

Fetal aneuploidies: what are they and how are they detected during pregnancy?
Related articles

Azoospermia: Is it possible to become a father?

What is azoospermia? Doctors speak of azoospermia when no sperm are found in the semen. Men with azoospermia are infertile. However, those affected do not have to completely abandon their desire to become fathers. There are procedures that make pregnancy

Infertility and its genetic causes

What is infertility? Infertility is a multifactorial disorder that affects approximately 15 per cent of couples of reproductive age. The causes of infertility are equally attributable to men and women. It can be defined as the inability to achieve or 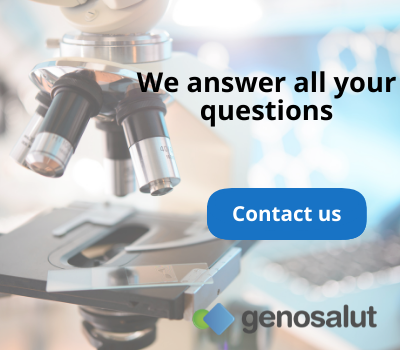 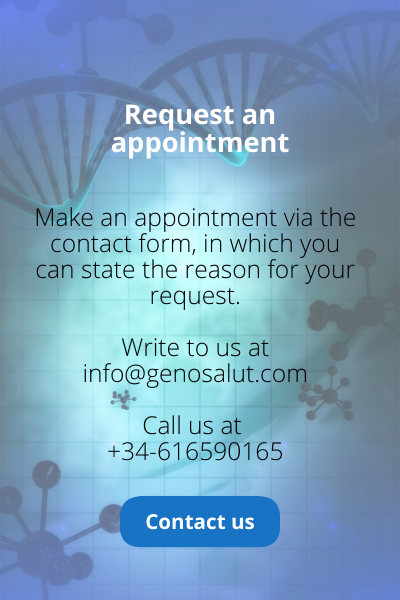