What types of cancer do we analyse?

We are currently working on updating the website and we have more genetic tests available. If you do not find what you are looking for, please contact us through our contact form or call us on +34 616 59 01 65 from Monday to Friday from 9.00 am to 1.00 pm.

Knowing your cancer risk can help you take action

You will know if you are more likely to develop cancer

These tests determine whether you are more susceptible to a certain type of cancer. That is, if you are more likely to get cancer than the general population.

Knowing whether you carry a mutation associated with an increased risk of cancer will let you know if you can pass it on to your offspring.

Together with your doctor, you can determine strategies for early detection

Such strategies may include earlier and more frequent screening. For example, if you are at high risk of breast cancer, your doctor may recommend mammograms at an earlier age.

If you already have the disease, genetic testing can help determine the most appropriate treatment. 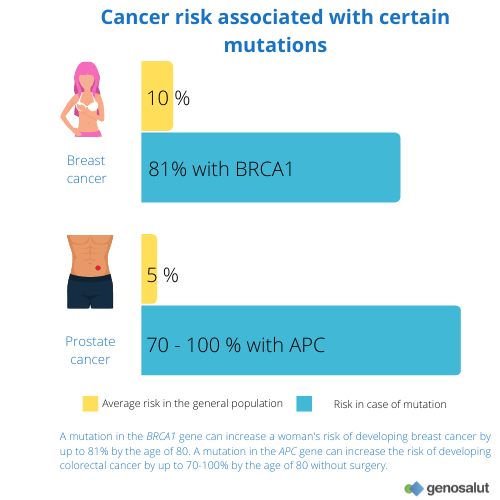 What genetic tests for hereditary cancer do we offer at Genosalut?

At Genosalut we offer different genetic tests for the detection of variants associated with increased risk in the most common types of hereditary cancer (breast, colon, rectum, ovary, prostate…). These tests include: familial mutation analysis, panels, exome analysis and genome analysis.

Study of a genetic variant of clinical interest associated with hereditary cancer present in other previously diagnosed family members.

Thanks to the sequencing of all genes using next generation sequencing (NGS) techniques, we can determine the presence of mutations associated with hereditary cancer.

Thanks to the sequencing of all coding (genes) and non-coding regions using next generation sequencing (NGS) techniques, we can determine the presence of mutations associated with hereditary cancer.

Genetic testing for hereditary cancer, what is it and what is it for?

Genetic tests allow us to study the alterations in genes (mutations) associated with an increased risk of cancer and therefore we can find out if there is a mutation responsible for the different types of hereditary cancer.

Knowing that you carry a mutation that increases your risk of cancer will allow you and your doctor to create a personalised screening and prevention plan designed to help reduce the risk of developing cancer.

What are sporadic, hereditary and familial cancers?

Cancers are caused by changes in genes (mutations). In most cases, these changes occur spontaneously (sporadic cancer) during the course of life, as cancer is primarily a disease of old age. In other words, to a large extent these mutations are not inherited, but can appear as we grow older. However, there are certain cases of cancer that show familial aggregation – hereditary cancer and familial cancer.

What is the rate of hereditary cancer? 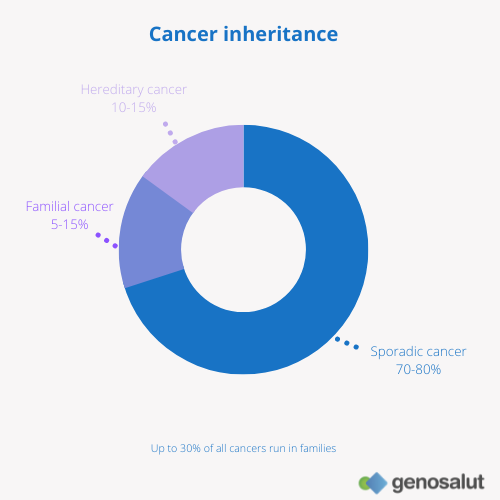 It is estimated that between five and thirty percent of cases of cancer present a familial aggregation.

We speak of hereditary cancer when there is a known congenital genetic predisposition (one or more mutations) that can be transmitted from parents to children. In most cases there are usually changes in one or more genes, especially those that play a role in cell cycle control or in the repair of genetic damage (DNA damage).

Familial cancer is a cancer that occurs in certain families more often than expected by chance. Although no specific mutation has been linked to these cancers, familial cancer may have a hereditary component that has not yet been identified and/or the influence of a shared environment.

Cancer is a collective term for a number of diseases with common characteristics. All cells in our body have an “internal clock” that controls the different phases of the cell cycle, i.e. the stages that take place in the cell during its growth, cell division and/or cell death (apoptosis). In cancer cells, this regulatory mechanism (“internal clock”) is altered.

What are the main causes of cancer?

The onset and development of cancer is a complex process that has a multifactorial origin. Among the causes related to cancer are genetic and environmental factors. These factors alter the genetic material (DNA) of cells, leading to dysregulation of the “internal clock” and uncontrolled proliferation.

Some of the factors that promote these changes and play a role in the development of cancer are:

What are the stages of cancer?

To summarise, the main stages of the different types of cancer are as follows:

When should hereditary cancer be suspected?

There are families in which certain types of cancer, especially breast cancer, ovarian cancer or intestinal cancer, are more frequent. However, this frequent occurrence does not automatically mean that there is a genetic predisposition to suffer from it.

Certain criteria and tests are used to determine whether a cancer is hereditary. If there is a suspicion, it is possible to receive genetic counselling or advice and, if appropriate, genetic testing which can identify whether there are certain mutations in the family that carry an increased risk of developing a type of cancer.

To summarise, a family is suspected of having one of these mutations if:

What is the probability of inheriting cancer?

In the event that a person is a carrier of a genetic mutation that predisposes to a higher risk of suffering from some type of cancer, he or she can transmit this mutation with a 50% probability to his or her offspring. If a person has not inherited the mutation from their parents, their own children will not be affected as the mutation does not skip a generation.

What are the most common types of hereditary cancer?

What genetic tests are available to determine cancer risk?

What does a positive result mean? What are the probabilities of developing cancer?

It is important to understand that what is inherited is the risk, the susceptibility to suffer a certain type of cancer. In other words, not all people who have inherited one of these mutations will develop the disease, but the probability that they will end up suffering from cancer will be greater than the probability of the general population. Only some people with a genetic mutation will develop cancer.

If the test result is negative, there is no proven genetic risk of developing cancer. However, this does not mean that you cannot develop cancer during your lifetime.

In other words, a woman can have a 45% to 65% chance of developing breast cancer and never develop the disease. While a woman with a 25% chance can develop breast cancer.

What is genetic counselling for hereditary cancer?

Genetic counselling can help determine whether cases of cancer in the same family have a common genetic origin and, if so, communicate to family members the risk of developing cancer at some point in their lives.

To do this, the genetic counselor:

The genetic counselor will take into account and inform the patient about the possible social and economic consequences, as well as the psychological burden. He/she will give him/her all the necessary information to be able to reflect, also within the family circle, on the consequences of the results of the genetic study.