What genetic tests for fertility problems do we offer?

We are currently working on updating the website and we have more genetic tests available. If you do not find what you are looking for, please contact us through our contact form or call us on +34 616 59 01 65 from Monday to Friday from 9.00 am to 1.00 pm.

Why is the Genosalut fertility diagnosis useful?

Fertility problems can have genetic causes

In up to 30% of infertility cases the cause may be genetic. At Genosalut we analyse the genetic causes of female and male infertility. Once we have obtained the results, we explain them to our patients and discuss with them the next steps to take.

Modern medicine can help many couples to have children

Advances in diagnosis and assisted reproductive techniques now make it possible for many couples with fertility problems to have children. In any case, however, it is important to determine the cause first.

Certain genetic abnormalities may have consequences for the offspring

Some genetic errors have no consequences for the carrier, but can lead to miscarriages or to poor development and disabilities in the child.

Offspring of men with severe oligozoospermia or azoospermia have a significantly increased risk of developing cystic fibrosis. This is a serious disease, especially of the lungs and pancreas. This risk should be ruled out or recognised before planning fertility treatment. 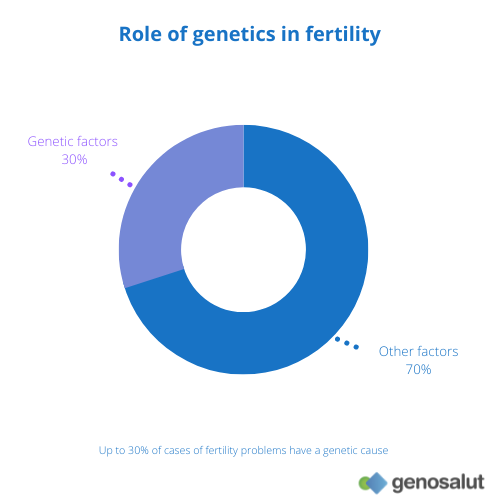 What do we do at Genosalut for couples with fertility problems?

In many cases, the results of certain genetic tests provide information that makes it possible to determine or narrow down the cause of infertility. In this way, the couple can obtain a result that allows them to know their chances of achieving a full-term pregnancy. In other words, the identification of the cause of infertility allows for personalised and informed counselling that can be adapted to the needs of people seeking medical support.

At Genosalut, in addition to carrying out various diagnostic tests, we advise couples in whom we detect a chromosomal abnormality or mutation in the context of infertility clarification, as sometimes the knowledge leads to the possibility that the offspring:

What do we examine during the fertility diagnosis?

Depending on the case and the history, we recommend one or more of the following tests:

Genetic diagnosis: its role in fertility and pregnancy

In recent decades, more and more people have been unable to realise their dream of having children. There are many factors, including genetic factors, that affect the fertility of women and men.

In recent years, genetic diagnosis and counselling have acquired a relevant role in cases of infertility and recurrent miscarriages, making it possible to clarify the cause of these problems and also to propose solutions in a high percentage of cases. At Genosalut we have been advising and helping couples who wish to have children for more than 10 years.

What are the causes of infertility? 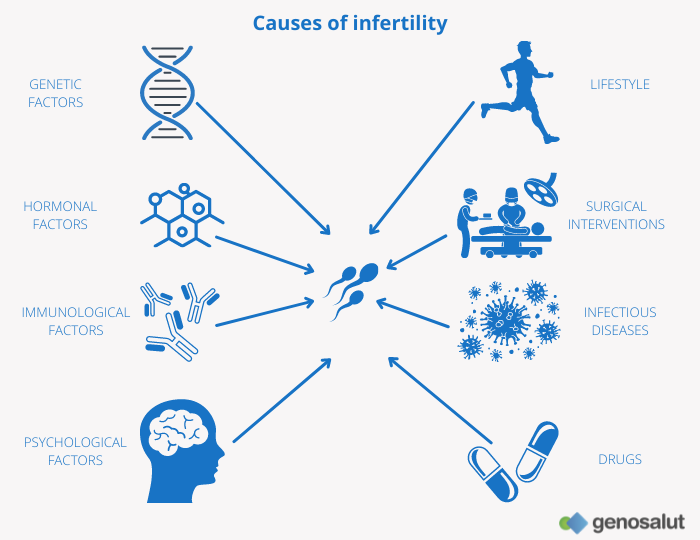 Like other multifactorial diseases, environmental factors as well as genetic and/or epigenetic abnormalities are involved in its onset, which makes it very difficult to determine its aetiology. According to recent data, genetic origin is the cause in approximately 15% to 30% of infertile individuals.

These environmental and genetic factors will affect the different processes related to reproduction, which is why we find different types of problems: hormonal, immunological, psychological, lifestyle-related (exercise, diet…), derived from surgical interventions, caused by infectious diseases…

Infertility is a multifactorial and complex condition that affects approximately 15% of couples of reproductive age. It can be defined as the inability to achieve or complete a pregnancy after a period of one year of sexual intercourse without contraception and is often attributed to men and women alike.

What types of infertility are there?

As mentioned, there are multiple causes to explain the origin of infertility and there are several types of classification depending on the approach to these causes.

The different infertility problems can also be classified on the basis of the following criteria:

How does fertility vary with age?

With advancing age (especially for women), the chance of achieving a pregnancy in each cycle decreases:

What are the genetic causes of infertility?

Chromosomal abnormalities are relatively common in humans and are among the most frequent genetic causes of:

Regarding numerical abnormalities and their relation to infertility:

In the case of structural abnormalities, the number of chromosomes is correct but not their structure. Among the structural anomalies we distinguish:

What are the most common genetic causes of male infertility?

What are the most common genetic causes of female infertility?

What are the most common genetic causes of recurrent miscarriages?

More than half of all miscarriages are due to chromosomal abnormalities in embryos. In most cases, these abnormalities are the accidental result of the complex processes surrounding the reproductive process (from egg and sperm formation to the early stages of embryo development).
However, in about five percent of couples with recurrent miscarriages, it is an inherited disorder usually due to structural chromosomal abnormalities. The carrier of this genetic abnormality is physically and mentally healthy. However, during the formation of the reproductive cells (sperm or egg cells) and the subsequent fertilisation, incorrect combinations can occur, resulting in the subsequent death of the embryo or abnormal development of the child.

There are also other causes of miscarriages, such as blood clotting disorders (thrombophilia), organic causes (congenital malformations of the uterus, fibroids, etc.) and metabolic and immunological diseases.

Couples with fertility problems often have a slightly increased risk of having offspring with a disease or disability.
In cases where the cause of the fertility disorder is a chromosomal abnormality, a premutation of the FMR1 gene or a mutation in the cystic fibrosis gene, the risk of the child having a genetic disability may be increased. Therefore, it is very important to know the causes in order to take appropriate measures in the context of fertility treatment.

What are the objectives of these genetic studies?

As mentioned, in up to 30% of cases fertility problems may have genetic causes. A genetic study can help determine the problem and dictate the steps to be taken.

The results of these genetic studies allow us to determine if there are:

Who covers the costs of genetic diagnosis and counselling in cases of infertility?

As a general rule, genetic counselling is not covered by any kind of health insurance. Genetic testing for miscarriage or fertility problems is covered by some private insurance companies. You can come to us with a certificate from your doctor or with your insurance card.